Got up before dawn to go to the feeding station at Haigh but didn't rush and enjoyed a few cups of coffee before setting off. Arrived at around 7:30 and put a 60 and 30 ft net in the usual dog leg. Didn't expect to catch too much despite almost perfect overcast conditions with only a slight breeze as so many birds seem to be on territory and breeding following the recent spell of warm weather.
The slow if steady catching rate allowed me the time to take a few photographs of species that don't usually get a look in such as Wren and Dunnock.

﻿Only stayed around 4 hours but still managed to catch 19 new birds and 10 retraps with 8 Greenfinches being the most numerous of the new birds; 3 of which were adults including this fine male.
﻿﻿﻿﻿﻿﻿﻿
Fewer Chaffinches were around but those that came to the feeders were looking their best as were the Bullfinches.


I also tried playing Redpoll song for a while and caught 3 Lessers that were probably on their way to breeding grounds further north.  Redpolls are one of my favourite species and are likely to feature in this blog whenever I catch them.

Not a bad morning really for the time of year and ringed a new Blackbird in the garden trap when I got home. Had to go to work in the afternoon but caught a pair of retrap Starlings in the evening when I finally got home.
I will see if I can get up early in the morning and hope a few Redpolls are on the move.
Posted by Peter Alker at 23:10 No comments:

I have added the ringing totals for Leigh Ringing Group from my copy of the data base as it is more trouble than it is worth to separate mine out. My copy of the data base may not always be fully up to date but the totals will give a good idea of where we are up to. Up to date or not I hope to add to them tomorrow weather and work permitting.
Posted by Peter Alker at 23:23 No comments:

Another glorious day but I decided to give ringing a rest and go for a walk in Orrell Water Park with the dog and the 'big' camera. There wasn't much about at first and what there was chose not to be very co-operative. It is funny how birds and wildlife in general seem to flaunt themselves when you are not carrying a camera!

Patience paid off and I eventually got some good views of a few birds and butterflies but I fluffed most of my shots as I kept getting the camera settings wrong for the conditions. I haven't used the Nikon for a while and I clearly need to get used to all the controls again.

I was still hopeful that I had got a few good shots but when I got home and viewed them on computer I realised that I had made a bigger hash of things than I had thought. The following are the best of a really bad bunch and I could kick myself for not getting much better results.

With the forecast for yet another glorious day and wall to wall sunshine a trip to the baited site at Haigh wasn't likely to produce many birds. I agreed to meet John (Gramauskas) and Mike (Cooper) at 08:30. Early morning starts haven't been productive for a while so a sensible start time was the order of the day and is always appreciated.

We erected two nets and waited to see what the warm weather, slight breeze and bright sunlight on the nets would allow us to catch. The catching rate wasn't too bad for the conditions and resulted in a reasonable catch up to lunchtime.

Highlight of the day was a control (ringed elsewhere) Goldfinch; ring number R695571. It may be a while before we discover where it was ringed but details will be posted in due course. This is the second control Goldfinch caught at Haigh this year.

That wasn't the only Goldfinch of interest. Another was caught wearing an avicultural plastic colour ring. This bird was obviously part of some breeding programme to enhance various plumage features and had presumably been released. 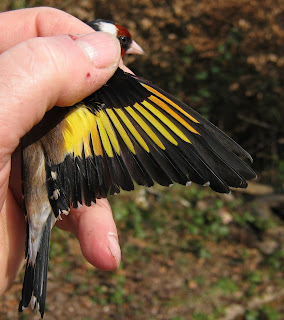 ﻿Some of the outer webs of the wing feathers were orange instead of yellow and there was much more white in the tail, especially the sub terminal patches on the inner web of the tail feathers. Some of the primaries were narrower than normal and the colours weren't symmetrical so it probably didn't make the grade and was presumably released by its breeder as a result.
﻿﻿﻿﻿
﻿﻿I had caught a Chiffchaff at the site just a few days before and what I thought was the same bird was still on territory and singing near the nets but when it was caught it turned out to be a new unringed bird.

Just before leaving Bryn (the dog) alerted me to a Hedgehog that was stumbling about in the open. It was clearly emaciated and probably on its last legs. I tried offering it water, worms and snails but it made no attempt to eat or drink and stumbled on. As it wasn't prepared or able to eat or drink it was probably beyond any help and may have had other underlying problems.

Here we go with my first post. I have been off work all week and have done a bit of ringing each day. Best day of the week in terms of numbers and variety of birds ringed was Wednesday 21st when I went up to Haigh Hall Country Park near Wigan. I started off putting a net across the river Douglas in the lower plantations where I had previously missed Dipper and Kingfisher. I kept an eye on the net from a little distance away and I didn't have to wait long before a Kingfisher flew in. As I was extracting the Kingfisher a Dipper flew in the net just to the side of me. A excellent start to the day. 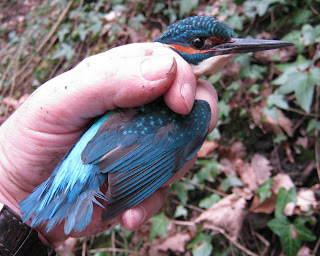 I decided to stay a bit longer and within an hour a second Kingfisher was caught. Shortly after another Dipper bounced out of the net so I decided to pack up and try my luck elsewhere.

I drove up to the feeding station near the Hall to top up any feeders that were running low. This baited site has been highly productive since I started using it at the start of the year. It is still producing good numbers of birds considering the time of year and warm weather. Having topped up all the feeders I decided to put up a net for a couple of hours. This session produced a modest catch of 14 new birds and 4 retraps before it was time to move on.

On route home I decided there was time to try for Kingfishers and Dippers on another stretch of the river Douglas. A net was soon being erected across the river with my dog ,Bryn, looking on in his usual cross pawed pose. I didn't mention his presence earlier but he often accompanies me and has learnt to be very patient. 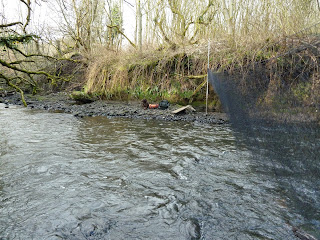 Another net was erected on the bank in an area of scrub and it wasn't long before a Chiffchaff, Wren, Goldcrest and Nuthatch had been caught and ringed. Over the next hour the net across the river produced a Kingfisher, a Dipper and 2 Grey Wagtails to round off a pretty good day.

Not a big total for the time and effort but nice to get a few riparian species that I don't usually catch. 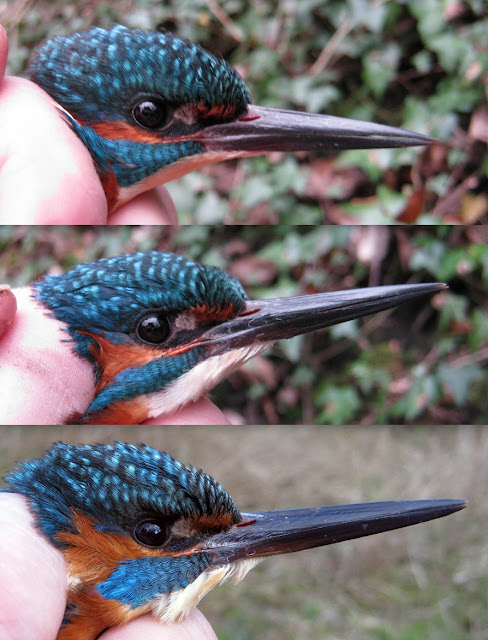 Here are head shots of the 3 Kingfishers. All 3 were males and it was interesting to see the subtle variations in the bill shapes.

So that is my first post and we will see how it goes from here.
Posted by Peter Alker at 19:41