Quiet at Billinge but busy in the garden.

It has been very quiet at Billinge over the last week and 4 visits (22nd, 24th, 25th & 28th) only resulted in a combined total of 7 birds caught [Willow Warbler 1, Blackcap 2, Robin 1, Tree Pipit 1, Great Tit 1 (1)]. Visible migration was minimal, to say the least, and there was no significant change in the numbers of warblers present with Chiffchaff, Willow Warbler and Blackcap the only species on territory.


While there has not been much happening at Billinge the garden has been getting very busy. The cold spring has delayed breeding in many species but it doesn't appear to have had much of an effect on the local Starlings and most pairs are feeding nestlings now. I run a RAS project on Starlings and attract them to the garden with home made fat blocks but more about that in a future post.

There was a general lack of birds and in many respects it was very disappointing morning but there were a few bits of interest that were topped off in fine style by an Osprey that flew directly over me towards the end of the session. Only 9 birds were caught over the best part of 5 hours but they did include a Tree Pipit and a couple of interesting retraps. Once again visible migration was virtually none existent with 3 Tree Pipits, 5 Lesser Redpolls and the aforementioned Osprey being the only birds seen moving north.


The first of the interesting retraps was a female Blackcap which was originally ringed as a first-year bird in August 2014 and hadn't been recaptured during the intervening period.

The other interesting retrap was a Willow Warbler that, at first glance, looked more like a Chiffchaff than your typical spring Willow Warbler.


There has been a distinct lack of Lesser Redpolls moving through so far this month and the 5 seen on this visit is the largest count. They have been absent on most days and on the few occasions any have been recorded it has only been ones and twos.

Tit and knocker, and more commonly their plural forms, are often used synonymously in slang and certain types of humour but in this case the tit and knocker is a Great Tit that acts like and old fashioned knocker-up by tapping on the bedroom window every morning. If you are not familiar with the term 'knocker-up' it was a profession in Britain and Ireland that developed during the industrial revolution when alarm clocks were relatively expensive and not very reliable. The knocker-upper would go around and wake clients up, often by tapping on their bedroom window with a long stick, so they wouldn't be late for work and it was common job in the industrial towns of northern England (link here).

Our knocker-upper has been coming to the bedroom window for about a week now and the tapping usually starts about 6:30am and continues periodically throughout the morning and possibly longer. It is probably attacking its reflection but it is not a male as might be expected, no, our knocker-upper is a female Great Tit and can be sexed by the narrow and broken black stripe on the underparts.

This bird isn't coming across it reflection and then attacking it on each occasion as it usually appears from a direction that wouldn't allow it to see its reflection first. I suspect it has developed this behaviour from an initial chance direct encounter with its reflection and all of the return visits are to check for an intruder but when it gets level with the window it obviously sees its reflection again and responds as if an intruder has returned. This behaviour is very similar to the Dunnock that displayed to its reflection in the car wing mirrors last year. It returned to the mirrors in anticipation of seeing another Dunnock and not because its reflection suddenly came into view (link here) and I confirmed that when I covered the mirrors in bags and it still came back looking for its reflection. I think the female Great Tit is doing something very similar and is flying up to the window in anticipation of seeing what it thinks is another Great Tit rather than responding to something it has just seen. 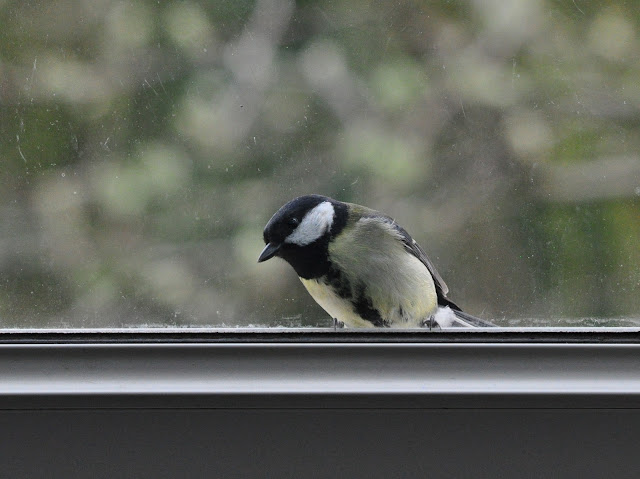 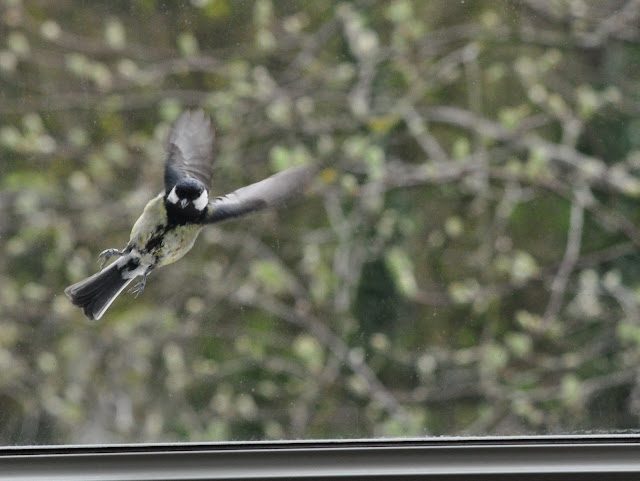 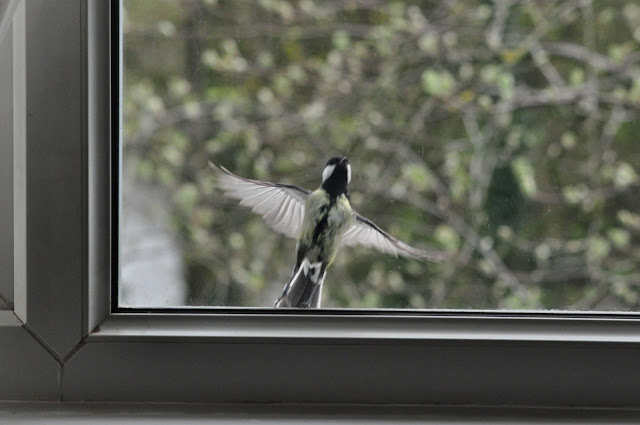 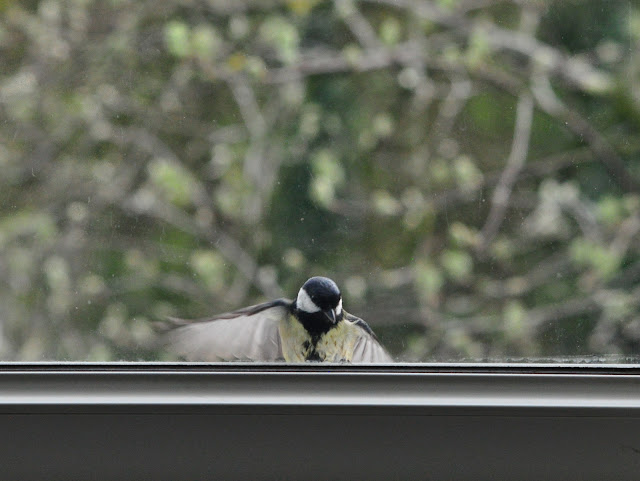 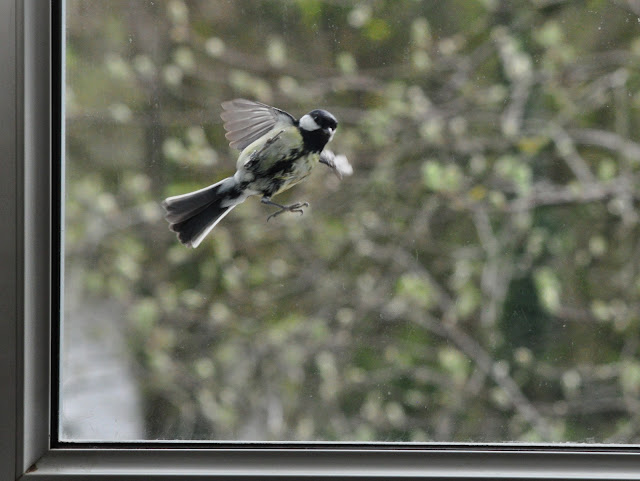 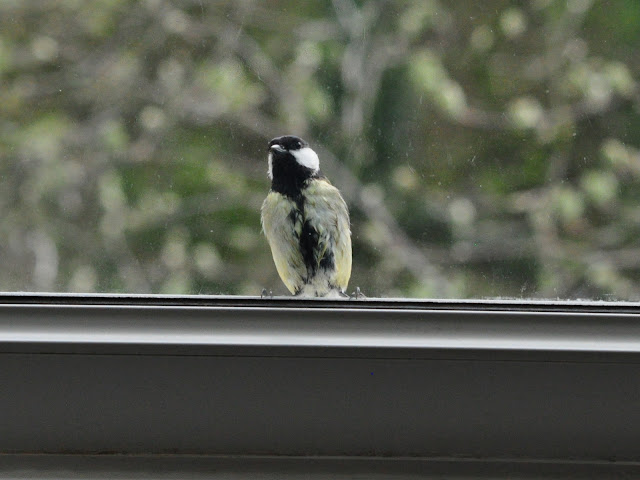 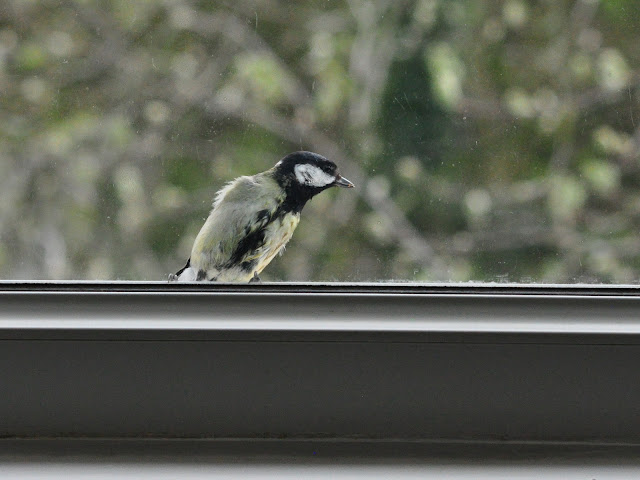 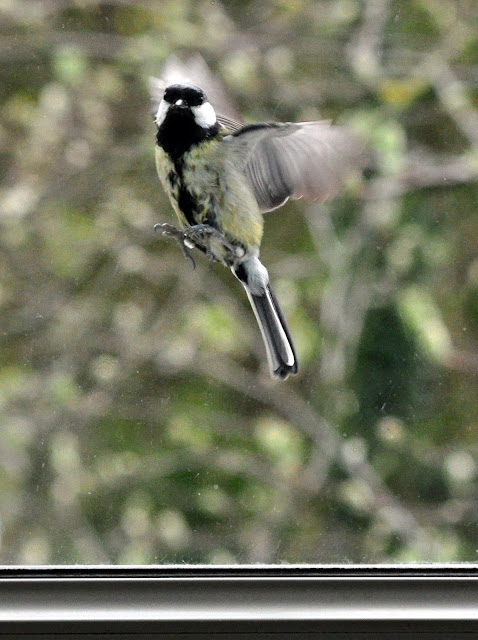 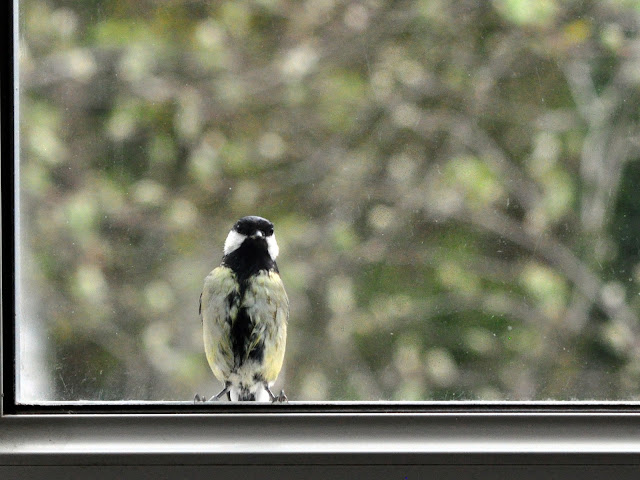 Now you may be wondering why I am posting about this Great Tit rather than any ringing I have been doing at Billinge. Well, the simple answer is that it has been extremely slow going at Billinge over the last ten days with only a very slow increase in the number of summer visitors present and virtually nothing in the way of visible migration. Hopefully that will change now that some warmer weather with a more favourable wind direction has finally arrived and with a bit of luck I could have a visit worth posting about in the next few days.

Tales of the unexpected.

I had an unexpected visitor in the garden on the 6th in the form of a Blackcap. I had been keeping an eye on the feeders when I suddenly noticed there was a male Blackcap feeding on the fat blocks. There hadn't been any Blackcaps in the garden during the winter nor had I encountered any of the summer visiting variety this spring so it was my first sighting for the year, anywhere. As it seemed quite at home feeding on the fat blocks I suspected it could be a bird that had wintered in the UK rather than one that had just returned to breed as I wouldn't have thought the latter would recognise the fat blocks as food. Obviously it is only a suspicion but I think it is a reasonable one.

I put a net up in the garden the next morning (7th) with the primary aim of catching Siskins as a few were still visiting the feeders. The first bird caught was a Blackcap and it was almost certainly the bird I had seen on the fat blocks the previous day. It was a 2nd calendar year bird, so hatched last year, and it was carrying a moderate amount of fat with a score of 3 on the ESF scale. More importantly it now has a ring on it so there as a chance of finding out which type of Blackcap it is, winter visitor or summer visitor.

I only caught one other bird before rain curtailed proceedings and that was a Siskin, the target species, and it was the fattest Siskin I have caught this spring. It weighed 17.0g which means at least one third of its weight was fat. Siskins that attain such weights are likely to be of Scandinavian origin or from further east as it is far more fuel than would be required if it was just returning to Scotland to breed.

Yesterday (the 8th) I went up to the site at Billinge in the hope there would be a marked increase in warblers and some Redpolls moving through. Unfortunately the session was marred by fog which was very slow to clear and when it finally did some banks of fog or murk lingered in the surrounding areas. There were one or two more Chiffchaffs and Willow Warblers singing but that was about it and there were no Redpolls or anything else on the move overhead. However, it wasn't a complete waste of time as I did catch a bird that I would never have predicted, and that was a Fieldfare. They are pretty scarce on this side of the country once you get into April and they are never easy to catch so ringing one today was totally unexpected. It wasn't the only Fieldfare present as another was heard and seen through the gloom along with a Redwing.

A few morsels of interest.

Lots of sunshine but not many birds just about sums up the visit to Billinge this morning. I had thought the clear conditions would prompt some vis mig and that there could be a few warblers working their way through the bushes but the birds clearly had other plans. There was virtually nothing moving overhead save for the merest trickle of Meadow Pipits and that soon petered out. There wasn't much happening in the bushes either, apart from a couple of singing Chiffchaffs that were sorting out their territories, and the nets only produced 1 Blackbird in the first couple of hours.

It did look like it was going to be a complete write-off of a morning but then a fine male Brambling was caught and lifted my spirits. Shortly after a Willow Warbler uttered a few subdued snippets of song and while I was trying to locate it a Tree Pipit called as it flew over; both were firsts for the year and helped give the morning a whole new feel. I didn't manage to get any views of the Willow Warbler where it had been singing but that didn't matter as it turned up in one of the nets a little while later.

Things slowed down after that little flurry of activity but another morsel of interest came when a ringed Chiffchaff was caught in the last net round. It was a retrap from last year and had been ringed as a juvenile on 5th August. It is always good to retrap returning migrants and hopefully there will be many more in the coming weeks.

It may have been a very slow morning for the most part but it was an interesting one nevertheless.