A moderately windy day limited my ringing options to the woodland at Haigh Hall. I found a couple of sheltered spots and tried a few different lures but there was little about or passing overhead to call in. I was hoping the good blackberry crop would produce a few late Blackcaps but not a single Blackcap was heard or seen.


It was fairly slow going but I had a new camera to get to grips with and that helped pass the time. Goldcrests topped the totals with 7 ringed bringing the total ringed at Haigh to 34 this month and to 55 for all sites. These birds fascinate me and it will be interesting to see how many October will bring.


Passage overhead was largely limited to small numbers of Meadow Pipits along with a few Swallows and House Martins. However, a Turtle Dove caused me to do a double-take and was a complete surprise given their status these days.


A Southern Hawker was caught in a mist net and gave a photo opportunity as did a sheltering hoverfly and a Speckled Wood. The temperature only just reached levels to make these insects active and then only for very brief periods as clouds rolled by.

The forecast for Saturday was for wall to wall sunshine after a frosty start and very light winds so I decided to give Longshaw a try. I had a couple of nets up at first light but it was soon evident that birds were going to be few and far between with few birds calling in the bushes and only a trickle of birds passing overhead. It was so quiet that I resorted to taking some frosty photos to pass the time. Only 8 birds were ringed but they did include the first Lesser Redpoll of the autumn and a Grey Wagtail. 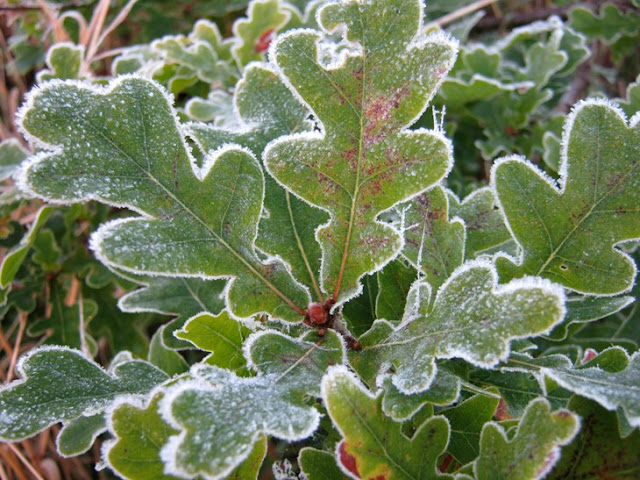 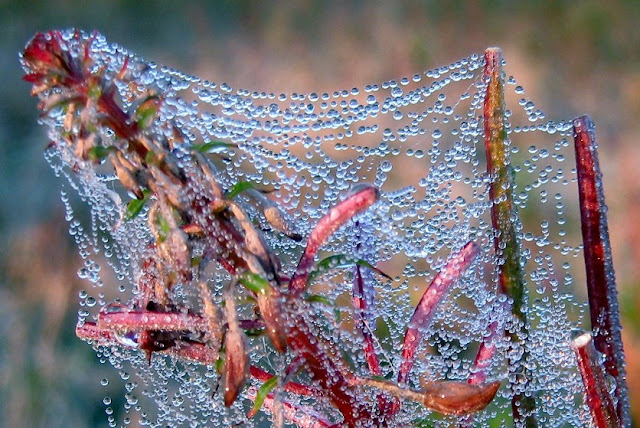 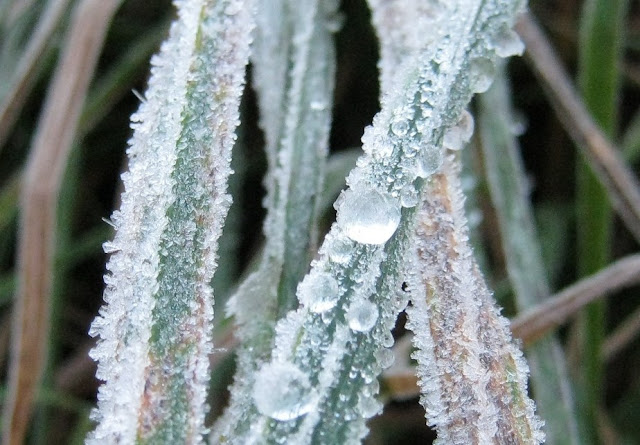 ﻿On returning home the calm conditions tempted me to put a net up in the garden as the feeders have been attracting good numbers of Goldfinches recently. The strong sunlight made the net more visible than I would have liked and some bird could clearly see it. However, it didn’t put the birds off and 25 new and 1retrap Goldfinches were caught along with a few bits and bobs. Had it been overcast more would have been caught as many birds clearly had no trouble avoiding the net.
﻿﻿
In the evening I went down to Scotman’s Flash to see if any Swallows were still roosting there. Conditions were perfect as a little cloud had bubbled up but, unfortunately, it was also perfect for midges and mosquitoes which really made their presence felt. Three Reed Warblers were caught before the first Swallows arrived and the calls of several Water Rails carried across the reed bed along with a brief burst of song from a Cetti’s Warbler. Initially only 4 Swallows appeared but around 50 eventually gathered as the light started to fail and 22 were caught including 1 retrap. Interestingly the retrap had been ringed in the roost on 2nd September so has stayed around for a good while.
Sunday was forecast to start calm but with a strengthening easterly wind picking up. I decided to give Longshaw another try but it was much as yesterday with little in the bushes or passing overhead. Only 9 birds were caught but they did include another Lesser Redpoll and the first Siskin of the autumn; a fine adult female.
﻿﻿


Total 71 (+3)
The best from the moth trap was a Small Tortoiseshell. Butterflies get caught very occasionally but are always a bit of a surprise. One insect that has been largely absent from my moth trap this autumn is wasps. I caught a few (queens) in the spring but very few this autumn and none this month; another and more welcome consequence of the poor summer weather.
﻿﻿

Yesterday the moth trap produced the first Frosted Orange of the autumn. This attractive moth brightened up what was otherwise another poor catch that was mainly comprised of a few Large Yellow Underwings, Lesser Yellow Underwings, Setaceous Hebrew Characters and Angle Shades. A Rhomboid Tortrix posed for a quick snap and was the best of only 4 micros. 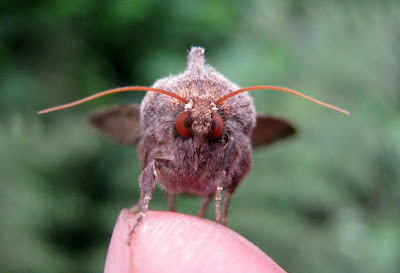 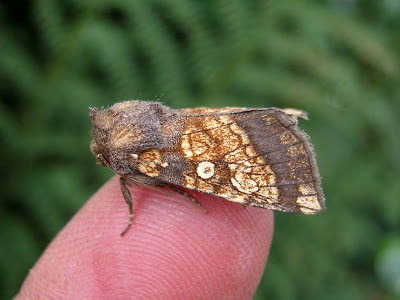 Saturday's ringing effort started at Longshaw and finished at Scotman's Flash with a brief afternoon session at Haigh in between. Catches were modest but interesting nevertheless. There was a good passage of Meadow Pipits over Longshaw along a few Grey Wagtails one of which was caught and ringed. A Willow Warbler was a fairly late record for this species but the main interest was what wasn't there: very few Chiffchaffs; no tit flocks to speak of, no Dunnocks at all. Yes it is September. ﻿﻿
﻿At Haigh Goldcrests were conspicuous by their absence save for one bird heard and caught. I caught 18 at this site in the first week of September and it will be interesting to see how numbers fluctuate as the autumn progresses and if any are retrapped. The good blackberry crop produced the goods with 6 Blackcaps ringed making the relatively brief visit worthwhile. A basking Small Tortoiseshell also added some photographic oportunities.
﻿﻿﻿
The day ended with a roost session in the reed bed at Scotman's Flash. At least 150 Swallows gathered and another decent catch was on the cards but the attention of at least 2 Sparrowhawks and a or 'the' Hobby had their impact with the Swallows reluctant to settle. The flock seemed to split up and settle in different areas with some birds only coming in really late. 26 Swallows were caught including another retrap from last year.

Today had been forecast to be a washout but the morning dawned dry with fairly light winds so I made the short walk to Longshaw again. I almost wish I hadn't as the bushes held even fewer birds than yesterday and there was virtually no passage. Two nets over 3 hours producing only 4 birds. Quieter than a quiet thing on a quiet day sums it up but it wouldn't be interesting if it was always the same or predictable. I could have caught more in the garden and subsequently did.

Another ton or so

The weather has not been too good this week but we have managed to catch just over 100 birds since my last post. Two trips to the Swallow roost at Scotman's Flash have produced 91 new Swallows and 1 retrap, 2 Sand Martins and 6 Reed Warblers. Just over 28% of the Swallows were adults which continues the high proportion of adults in the catches. The retrap Swallow had been ringed near my home at Longshaw 5 km away just over a year ago. Another 5 Reed Warblers were caught 13th and 3 of these had not completed their post juvenile moult so should stay around for a while yet and are an indicator of the success of later broods.
﻿﻿
I met up with Kane Brides this afternoon to try and catch and darvic a few Coot at Pennington Flash. For those who know the Steve Coogan character Paul Calf and the use of the phrase 'bag o' shite' you will know why that is appropriate to Coot ringing. It was far too windy really but I still managed to pick up 4 new birds and 2 retraps in a short session which bodes well for better conditions.

Moths haven't featured in my posts for some time now and that is largely due to the abysmal summer weather. I run a moth trap most days but there has been little or nothing to report of late. Silver Ys' being the only migrants with another 2 caught this morning.
﻿﻿
The weather looks ok'ish' for the morning but only an early start and time will tell.﻿﻿
Posted by Peter Alker at 22:27 No comments:

The month so far

Well I am very tired. It is only the 9th of September (or was when I started this post) and I have been out ringing on 16 occasions this month. I haven't taken a day off work for any of them and have been burning the candle at both ends with ringing sessions morning and evening most days. The generally fine weather has helped but has been far from perfect on every occasion. The Swallow roost at Scotman's Flash has been the main focus and produced the most birds.

Although we have ringed a lot of birds this is largely due to effort; all our catches are still pointing to a very poor breeding season as a result of the poor summer weather. In general there are far fewer juveniles of all species being caught or observed. The findings at the Swallow roost have been no exception with adults forming a much larger proportion of the catch than is usual. Another effect of the weather seems to be that some species have had a more protracted breeding season, presumably due to earlier failures. A Goldcrest in full juvenile plumage (8th) being an example as well as being the first I have caught in juvenile plumage. Similarly the good number of Reed Warblers ringed (62 juveniles) at Scotman's Flash seems to indicate that later broods have fared better in this species.

﻿
The highlight of a morning ringing session at Scotman's on Sunday (9th) was an unexpected Cetti's Warbler. The second ringed there this year and continuing the recent trend in sightings. In the evening a Hobby continued to target the Swallow roost there and could even be the bird that was ringed on 19th August. Same bird or not it continues what has been a good run of Hobby sightings for this site.

It has been a busy month so far with eight ringing sessions completed in the first 5 days. Most of these sessions have involved catching Swallows coming to roost in the reeds at Scotman’s Flash. At its peak the roost held up to a thousand birds and each night it has attracted the attention of a Hobby and one or two Sparrowhawks.
The Hobby has put on a spectacular display and is clearly having an impact on the behaviour of the gathering Swallows. Tonight they arrived much later, flew around much higher and only dropped into the reeds when the light really started to fail.

This month’s ringing total for Swallows now stands at 426. In addition 2 controls (birds ringed elsewhere) have been caught along with a bird that was ringed last year at the same site. A good number Reed Warblers have also been caught with 29 juveniles ringed and it seems that late broods may have fared much better than earlier ones.


Other ringing activity has included two short sessions at Haigh Hall and one at Longshaw.
September ringing totals to date are: