Goldcrests: interesting from head to tail

Seeing is believing sometimes and certainly is when it comes to a Goldcrest I caught earlier this month and another one I caught today. The first of the two was carrying an old injury, the likes of which I have never seen before, and the second is yet another known age adult with quite pointed tail feathers.

The first bird was caught at Billinge on 15/11/17 and appeared to be fit and healthy apart from having no skin and feathers on the rear of the skull. It was obviously an old injury as the edges of the skin than surrounded the expose portion of skull were dry and showed no signs of redness or infection. I have no idea what caused the injury but it shows how resilient such a small bird can be. It weighed 5.5g and was heavier than 6 of the 7 other Goldcrests caught that morning, 2 of which were larger males, so it was clearly doing OK. The biggest problem that this type of injury will cause is increased heat loss so while it appears to be thriving now its survival chances may be reduced as the weather gets colder, but then all Goldcrests have a tough time surviving when it comes to a cold winter.

The second Goldcrest was a retrap that I caught in the garden this afternoon. It was a male and when I looked at the tail it certainly didn't shout adult but the bird's ring number was from a sequence I was using at the beginning of the year so it had to be one. When I looked up the original ringing details it had been ringed in the garden on 22nd January so there is no question the tail you see in the images below is that of an adult.

The outer tail feathers were a bit paler and a bit more pointed than the others but they didn't appear to be as worn or as bleached as I would expect them to be if they were feathers that hadn't been replaced in the last moult. Having said that I have never caught a Goldcrest just prior to undergoing a complete moult or seen one with two generations of feathers so I don't know how worn or bleached old tail feathers get by the time they are normally moulted, let alone a couple of months on. However, I would expect them to look very bleached and extremely worn by now, especially the outers, and be much more obvious than appears to be the case with this bird. Forgetting the outer feathers the rest are quite pointed anyway and nearer the shape many associate with juveniles rather than adults. All 3 of the known age adults I have caught recently have had quite pointed tail feathers and it wouldn't surprise me if most adults have tail feathers with a shape that falls in the intermediate range of adults and juveniles and a good number probably get incorrectly aged as juveniles rather than being left unaged.

Images of the tails of the other known age adults can be found here and here.

This was a very nice surprise this morning as it is a bird I thought was likely to stay on my 'Billinge possibles' come 'wish list'. The site is looking quite bleak now that most of the trees and bushes have lost their leaves and being on a hill it does not have the sort of micro climate that attracts and holds late autumn and winter warblers. However, it is a great site for migrants and this Siberian Chiffchaff ('tristis') is presumably still on route to a nice warm sewage works or some wetland scrub on lower ground. 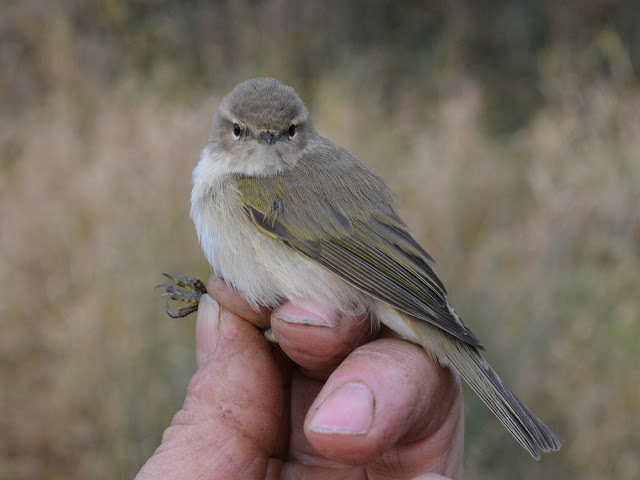 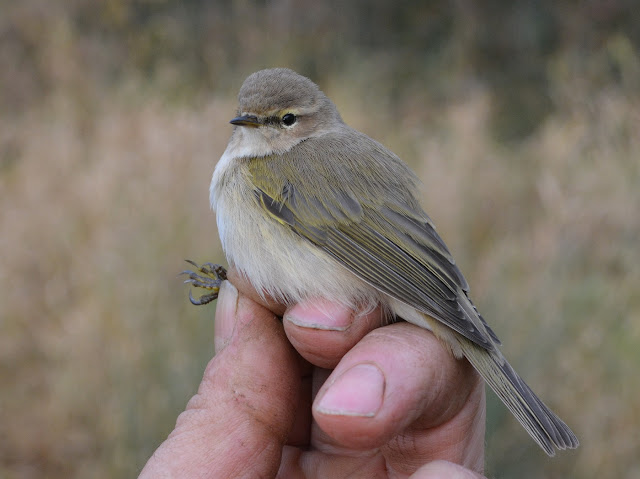 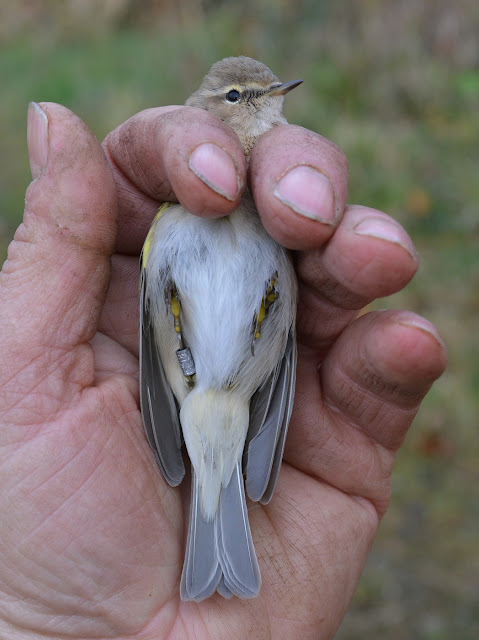 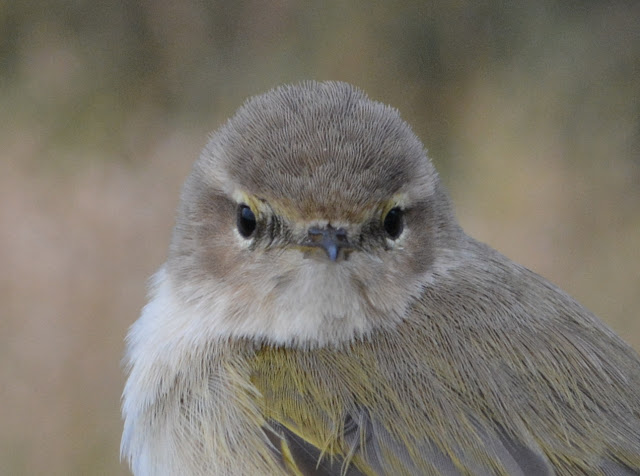 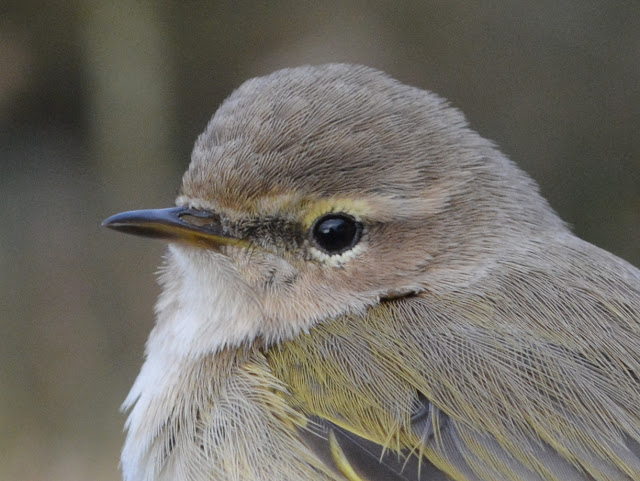 I am not going to go through all the plumage criteria as the images speak for themselves and there is plenty of information out there on the web, but it ticks all the boxes with one teeny weeny exception. The one thing it has that 'tristis' is not supposed to have is a hint of yellow in the supercillium immediately above the eye but then the full plumage limits of 'tristis' have yet to be determined so it isn't necessarily a problem. However, if a clincher was needed it came when it conveniently called, once in the hand and several times after release, with the call being a monosyllabic 'peep', a bit like a high pitched Bullfinch, and perfectly fitting the diagnostic call of 'tristis'.

Given that hint of yellow in the supercillium (not that I think it would have been noticed in the field) and as the plumage limits of 'tristis' are not fully understood I retained a couple of small feathers that the bird dropped. Hopefully, they will allow the bird's identity to be confirmed from their DNA so this may not be the last you here about this particular Chiffchaff.

It is that time of year when ringing forays on the hill go all country music which is OK if you don't mind slim pickings. The first hour or so usually manages to provide a few birds but the capture rate usually tapers off quite quickly and the remainder of the session often feels like there would be plenty of time to start learning to play the banjo. While the quantity and variety may not be there a degree of quality usually is and there is always a chance that something really interesting or unusual may turn up.

A fog hampered session on the 11th produce a total of 18 birds - 4 Goldrest, 3 Blackbird, a Fieldfare, 7 Redwing and 3 Chaffinches. Two of the Blackbirds were quite long-winged so likely to be of continental origin as were a couple of the Chaffinches. There haven't been as many Fieldfare passing through this autumn so catching one was a real bonus.

A session in clearer conditions on the 13th also resulted in a total of 18 birds being caught - 5 Goldcrest, 12 Redwing and a retrap Robin. The stand out highlight of this session was an Icelandic Redwing which stood out as looking different even as I approached it in the net.

Previous posts with images of 'coburni' types have always attracted a lot of views and there is clearly a lot of interest in the identification of Icelandic Redwings. Some people think wing length is the key to identifying Icelandic birds but there is a huge overlap between 'coburni' and and the nominate race 'iliacus' and wing length will only identify the biggest 'coburni'. Icelandic birds are generally darker and more heavily marked than the nominate race and while that can lead to a bias of only identifying the darkest and most heavily marked birds it will identify more birds than wing length. Anyway you can decide for yourself by looking at the images below and the previous ones I have posted here and here.

The new month started with a better than expected catch of 50 birds but numbers were much lower over the following 3 days and only resulted a combined capture total of 49. Early November can be quite productive but it looks like migration is drawing to a close a little earlier this year, although there could still be enough of interest to make occasional visits worthwhile right through to the end of the month.

Ist November
Ringing highlights included a Blackcap, a Fieldfare, 15 Goldcrest and a control Lesser Redpoll. Interestingly, the Redpoll was one I had encountered before; it was originally ringed on 03/04/14 in Llanfyllin, Powys, North Wales and subsequently recaptured at Crawford five times in spring/summer 2015, and again at Crawford in spring 2016. The ringing site at Crawford is only a couple of kilometres from the site Billinge but the distance from Llanfyllin to Billinge is 88km NNE. Sightings of note included a Woodcock, 4 Crossbills heading SSW and hundreds of Chaffinches heading north.


2nd November
A relatively short and quiet session with only 17 birds caught but a small movement of Lesser Redpolls resulted in 7 being ringed. This was made all the more remarkable by the fact that they were all adults. I have previously remarked on the unusually high proportion of adult Redpolls recorded at Billinge this autumn but a total absence of first-year birds in a catch of that size is unprecedented in my experience. A total of only 2 Goldcrest was also noteworthy because it contrasted sharply with the 15 ringed the previous day.

3rd November
Another quiet session that had a real end of season feel to it. Only 12 birds were caught of 4 species but they did included another Lesser Redpoll and yes it was another adult.

4th November
A slight improvement in both numbers and variety with 20 birds of 7 species being handled. A Blackcap was the best the nets produced but a noisy Hawfinch, that gave good views as it headed NNE at close range, was the standout highlight of the session. The penultimate bird ringed was a Lesser Redpoll and no prizes for guessing it was yet another adult. I have caught 12 Lesser Redpolls so far this month and every one has been an adult which is exceptional to say the least. On the theme of adults a Goldcrest that had been ringed as a juvenile in July 2016 was recaptured and provided another opportunity to photograph and show the tail shape of a known adult.

A session at Billinge on the last day of the month produced a catch of 38 birds and was made up of 36 new birds, a retrap and a control. There were a few Goldcrests in every net round and they easily took top slot with 24 ringed. There weren't many thrushes moving but a Fieldfare found its way into a net and was the first to be ringed this autumn. Just a couple of Lesser Redpolls were caught but I was pleased to discover that one of them was a control (a bird ringed elsewhere) so it will be interesting to find out where that one has come from.

A total of 746 birds were ringed at Billinge during October which is disappointing by that site's standards and is roughly half the total achieved in previous years. The main reason for this has been the lack of easterly winds which has resulted in much lower numbers of Redwings and Goldcrests passing through the site. However, Redwing and Goldcrest were still the most numerous species ringed by far and they topped the totals for the month with 292 and 259 respectively. Song Thrush came in third with 50 followed by Lesser Redpoll with 29 and Blackbird with 21. At the other end of the scale a Tawny Owl was only the second to be ringed at the site and a Firecrest was only the third ringing and sighting record of that species.
Posted by Peter Alker at 23:43 No comments: